Life, with all its diversity, is in crisis. As humans increasingly encroach on biologically complex semi-natural landscapes, no organism, place or ecological function remains unaffected. While all 196 parties (195 countries plus the European Union) to the UN Convention on Biodiversity (CBD) have agreed to monitor the state of biodiversity, the currently available methods to do so leave much to be desired.

The UN Convention on Biodiversity (CBD) obligates its 196 parties (the EU included) to monitor progress towards the 20 Aichi targets3 which include halving the rate of loss of natural habitats by 2020. Biodiversity change has many dimensions and occurs at a range of spatial and temporal scales at ecosystem, species, and genetic levels. However, the currently available methods for monitoring biodiversity leave much to be desired as substantial gaps remain in space and time that need to be interpolated between sample points, as well as gaps in the total number of species being inventoried. Traditional monitoring involves the field observation of species by trained specialists, aided by skilled volunteers, whose expertise is restricted to specific biotic groupings. In a process that is both time consuming and inconsistent across time and space, botanists identify and record the presence of plant species and ornithologists the bird biota, resulting in 'unpopular' biotic groups such as fungi, bacteria and insects being under-observed or escaping identification altogether. This renders traditional in situ biodiversity monitoring inadequate for regular global monitoring. 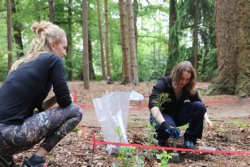 The overall aim of the BIOSPACE project is to monitor biodiversity by upscaling field observations and genomic (eDNA) information using next generation satellite remote sensing. A further key aim is the deepening of our scientific understanding of how biodiversity is impacted by anthropogenic pressure as well as by natural environmental gradients.To synthesize global biodiversity on a fine granular scale, the first specific objective is to predict biodiversity over large areas using environmental DNA (eDNA) and next-generation hyperspectral and LiDAR satellite remote sensing. As the richness in ecological function remains mostly invisible to remote sensing, the second objective is that global biodiversity may be monitored through ecosystem function by satellite. This would allow ecosystem function, expressed through foliar chemistry (e.g. N:P or C:N ratios) or through plant traits (expressed in Grimes' theoretical Competitor-Stress tolerator-Ruderal [CSR] strategies) to be parameterized and interpolated in next-generation satellite images using the functional genes from eDNA sequences. The third key objective will be to demonstrate and understand how the many available eDNA sequences interpolated by remote sensing for ecosystem function and taxonomy may be affected by environmental gradients and anthropogenic pressure.